I had the privilege of attending a worship-only service with a friend. While we were singing, I had two visions:

The scripture that came to me was Matthew 23:37 “Jerusalem, Jerusalem, who kills the prophets and stones those who are sent to her! How often I wanted to gather your children together, the way a hen gathers her chicks under her wings, and you were unwilling.”

Another that spoke to me was Isaiah’s vision of The Lord of Hosts (Isaiah 6:1-3) 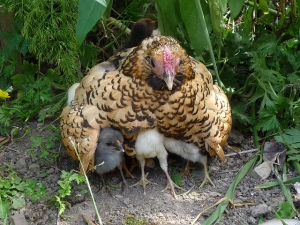 Ruth, from Moab, a Righteous Gentile
(Editor’s Note: Source)
The Rabbis tell us that Ruth placed herself under the shadow of God’s Wings (The Divine Presence) by uncovering the skirt at Boaz’s feet and slipping herself under that garment. Rav Shlomo ben Yitzchok, better known as Rashi said, “corner of a garment, i.e. place the corner of your garment over me as a token of marriage.” And according to Rabbi Shmuel de Uzeda who wrote a large commentary on Ruth, entitled Iggeres Shmuel, “take me as your wife with a proper wedding ceremony.” Can you guess what that skirt or garment was? Here’s a clue: it had “wings” on all 4 of its corners?

That’s right, it’s the skirt or garment with the Tzitziot (plural of Tzitzit) on it that was spread over her, a prayer shawl! She was under the shadow of EL Shaddai’s Wings and it brought her into His Presence, and Boaz had to try and redeemed her. That is just what Yeshua Messiah does for all who come into His Presence, under His Wings.